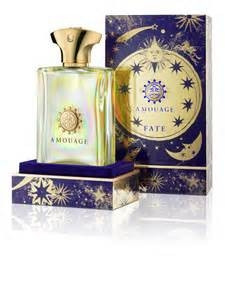 Fate Man Eau de Parfum spray by Amouage. Silhouette: AMOUAGE presents a new fragrant pair called FATE. In the final creation that expresses the end of the first cycle of the Amouage narrative, “Fate” for man and woman explores the uncertainty of the future and the universal principal by which the order of things is inescapably prescribed. In his latest conquest, Amouage Creative Director Christopher Chong proclaims a finale that parodies the force of the inevitable, veiled in the mysticism of the unknown. Silhouette: The new fragrances come in very distinctive and luxurious bottles in colors of pearl iridescence in shades of yellow, purple, light green and light blue. Gold details underline the luxurious composition. This fairy-tale edition is emphasized by the illustrations of the moon, sun and stars on the outer cartons that hold the bottles on the pedestals.
Fate for man first creates a sense of beginning with fresh notes of Citrus, Absinth and sharp Ginger which pervades to a predestined heart of Rose and Frankincense. The woody accord in the base of Cedarwood, Sandalwood, Musk, Liquorice and Tonka Bean adds a haunting intensity of uncertainty. Additional notes for the spicy woods fragrance include mandarin, saffron, cumin, everlasting flower, lavandin, cistus, copahu and labdanum. Fate Man was developed by Karine Vinchon Spehner.

This product hasn't received any reviews yet. Be the first to review this product!

Good things come to those who